This family has relocated to Terre Haute from the war torn area of Mariupol, Ukraine. A family with Ties to Faith Wesleyan Church is organizing a place for them to stay but they came with the close on their backs and one suitcase for the five of them.

Obviously they need basic items to get on their feet. Also, they could use some help learning the English language as only one of the 15 Year old can speak some English.

Contact information and how to donate me is available on their go fund me page. 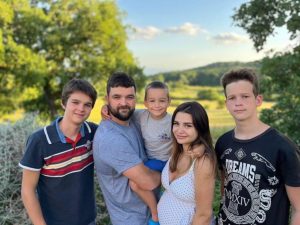 We are the most ordinary Ukrainian family, consisting of five people: me, my wife Albina, and three children - Yevhen, Timofii and Matvii. I, as the head of the family, have always earned to provide for my family. Until 2014, I lived in the city of Donetsk, where I come from. He first worked in the police, and then received a certificate for the right to engage in advocacy. But in 2014, Russia attacked Ukraine. The good life of the people of our city has ended. I had to leave the city of Donetsk, and move to the city of Mariupol and start life anew. Over the past 8 years, I have created and developed an operating company in the field of cargo transportation with my own personal trucks, as well as a construction company with a large staff.

In 2022, on the 24-th of February, Russia at 4 o’clock a.m. invaded Ukraine. We woke up to an explosion. And from that day on, airplane bomb blasts and rocket attacks became more and more frequent. Planes were flying every hour, half an hour, and when a plane flies, it doesn't leave until it drops bombs on residential buildings. Our family sometimes was at home, sometimes in the basement. The Russians bombed the communications and we, like everyone else, lost power, gas, water, and heating. When it was snowing, we drowned it on the fire and poured water into buckets that ran down the roof of the house and carried it up to our third-floor apartment.

We cooked food on the fire near the entrance, and when a plane flew, we ran to the entrance to hide. The food was running out. The stores were closed, and there was no humanitarian aid. We fed the children with the rest of the food and ate one spoonful of rice a day to keep the body going. We had no water at all and we had to go to the water spring together with the neighbors from our house. Planes flew, bombed and bomb blast fragmentations killed our neighbors, a man and a woman. They were left lying there on the road, no one picked them up.

A woman from the neighboring house was sitting in the basement with her children and went outside with her daughter to get water, and at that moment, a shell fell near the house, the cars that were nearby caught fire, the shell killed the woman and her daughter and four other people, the tenants of the house. Everything was in blood. It's horrible: they were lying near the house for a long time, and then the neighbors buried them near the entrance. Two of our neighbors with diabetes had no insulin and nowhere to get it. They died - a woman and a girl 14 years old. Because there was no insulin in the basement, where we were sitting, children were dying before our eyes.

I drove my family out first, and then I drove my neighbors from Mariupol - women with children, looked for and drove people who were wanted, took them to safe territory. The last time he drove over a roadblock, Russian soldiers smashed up a car so that he wouldn't drive people out. They were threatened to kill me. We had a business in Mariupol We had two cars Volvo, DAF, some trailers for 40 tons, Volkswagens, GAZelle vehicles. A total of 12 pieces. Almost all our cars were burnt, they were bombed, the bombs dropped from the Russian planes. The employers of our firm (where my husband was a director) were taken prisoners by people from DPR and Russian soldiers. And nobody could find them.

I remember when we drove out under the bombs, on the way I saw burning houses. A five-story building was on fire from a direct bomb hit, there were flames of fire from all the windows. The people in the house were burned alive. We, too, had been in the apartment and we could have been burned alive. These thoughts and memories make my blood rans cold in my body.

The sound of an airplane inspires fear and terror. When we left Mariupol, we were moving in the convoy of 50 cars, and we were going at the head of the convoy. The shells were flying over us and a shell hit the end of our convoy and blew up 4 vehicles. Those wrecked cars and the dead people who were in those cars are still there on the road.

I remember I was praying all the time, every minute of our moving. And I now understand very, very strongly that it wasn't us who got out of hell, it was God who took us out, it was all thanks to God alone. In Mariupol and along all the way we saw dead people, a huge number of them, a lot of wrecked cars. This was very scare!!

Our house was burnt, out things were burnt, our business, our documents, our cars – all were burnt. We have nothing.

All those deaths and unanswered fate cannot be forgotten.

All that we’ve seen and lived left a trauma in our souls. And when you remember how people died in your arms and you couldn't do anything to help them, you realize that you can't live in this city.

We don’t want to be back any more. The only thing we want is to live peacefully, work with God in our souls and a strong faith in God.

We don’t want to come back there. We want most of all to live quietly, work, with the God in soul and a strong faith in God.

We are honest, kind and decent people.

Faith Wesleyan Church is a Holy Spirit empowered, transformational presence in Terre Haute and the Wabash Valley. We are making disciples and making a difference.

You are always welcome! So come as you are. No need to put on the jacket and tie; or get a new dress. Engage with our other families as we walk through life together.